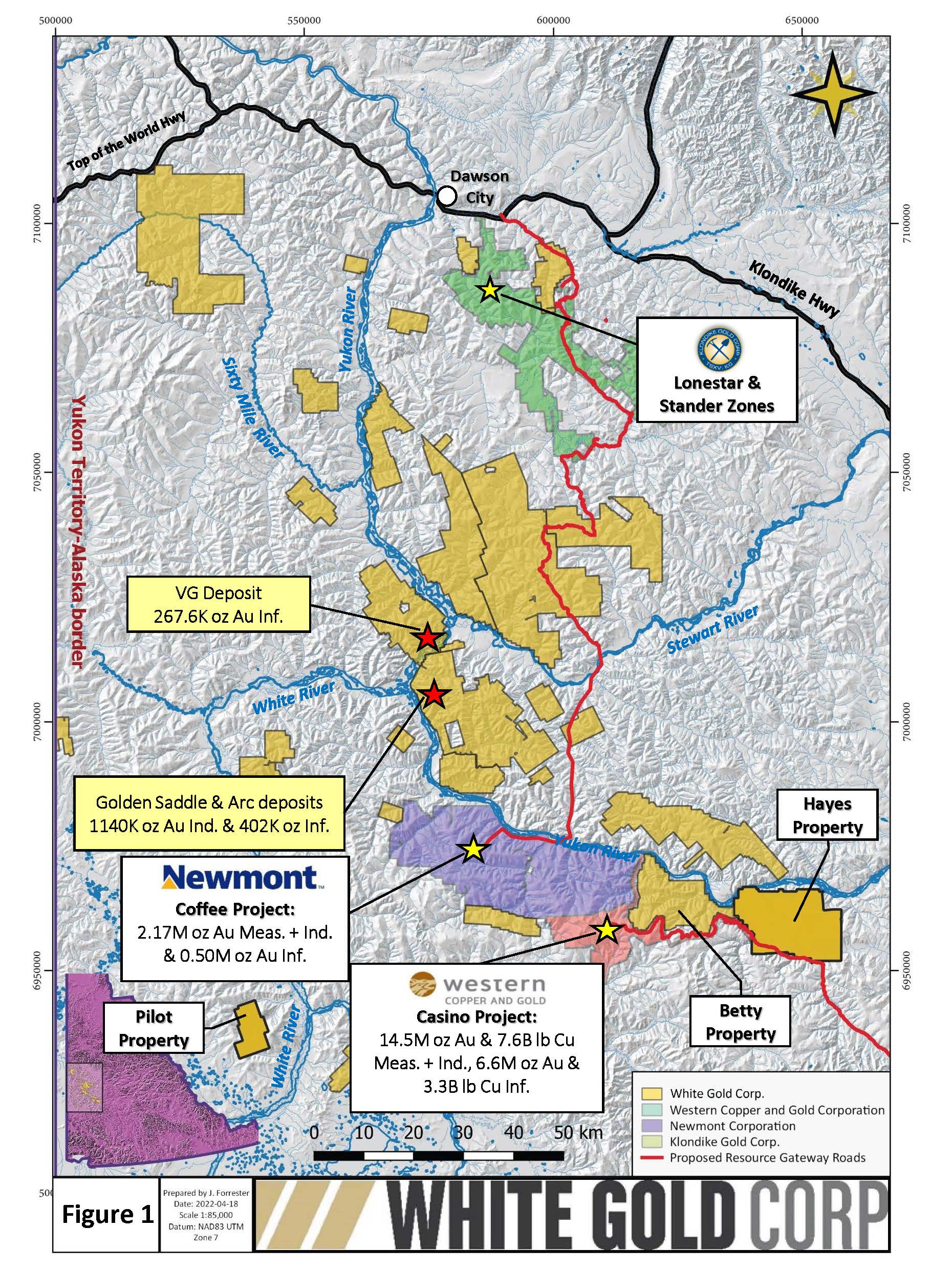 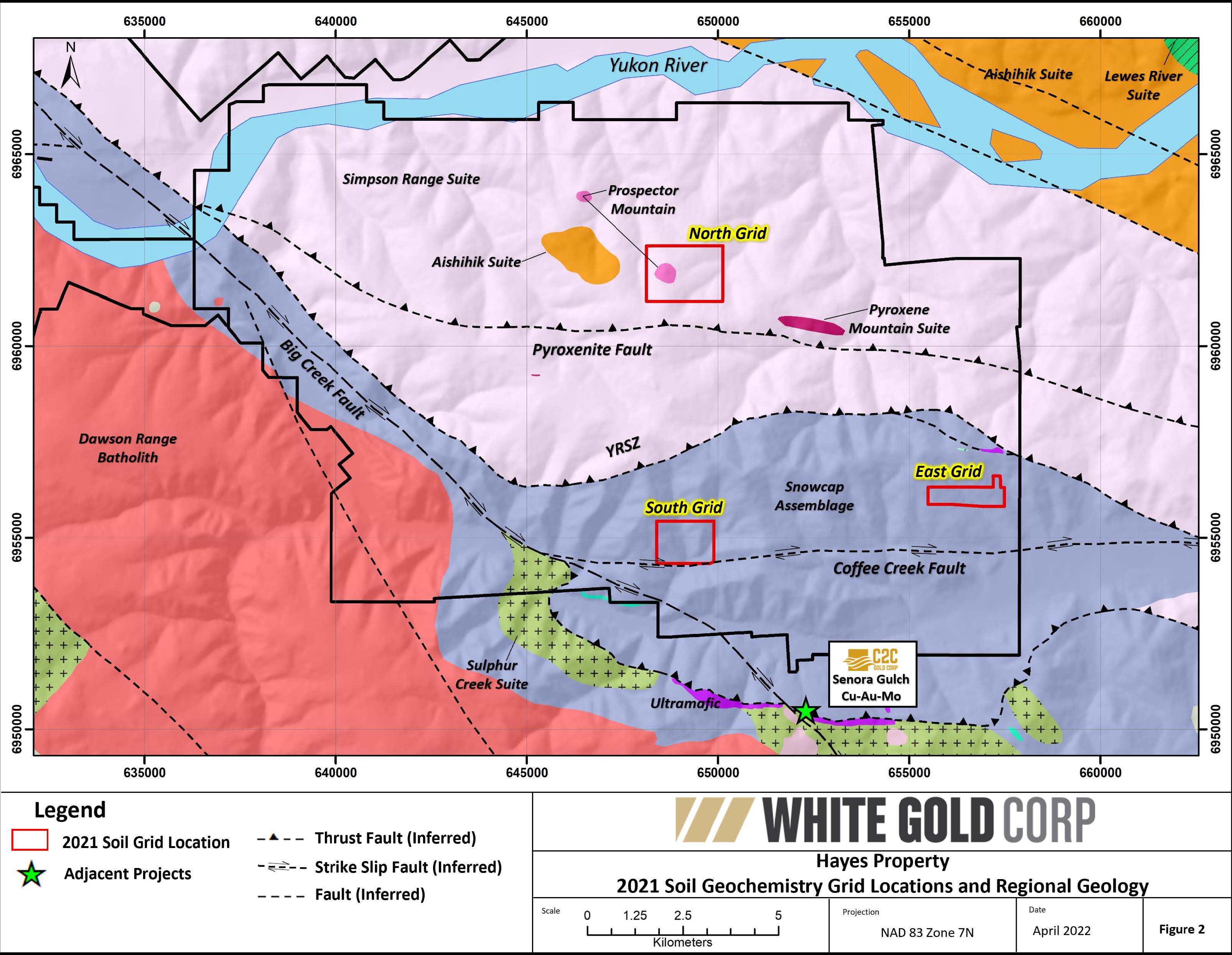 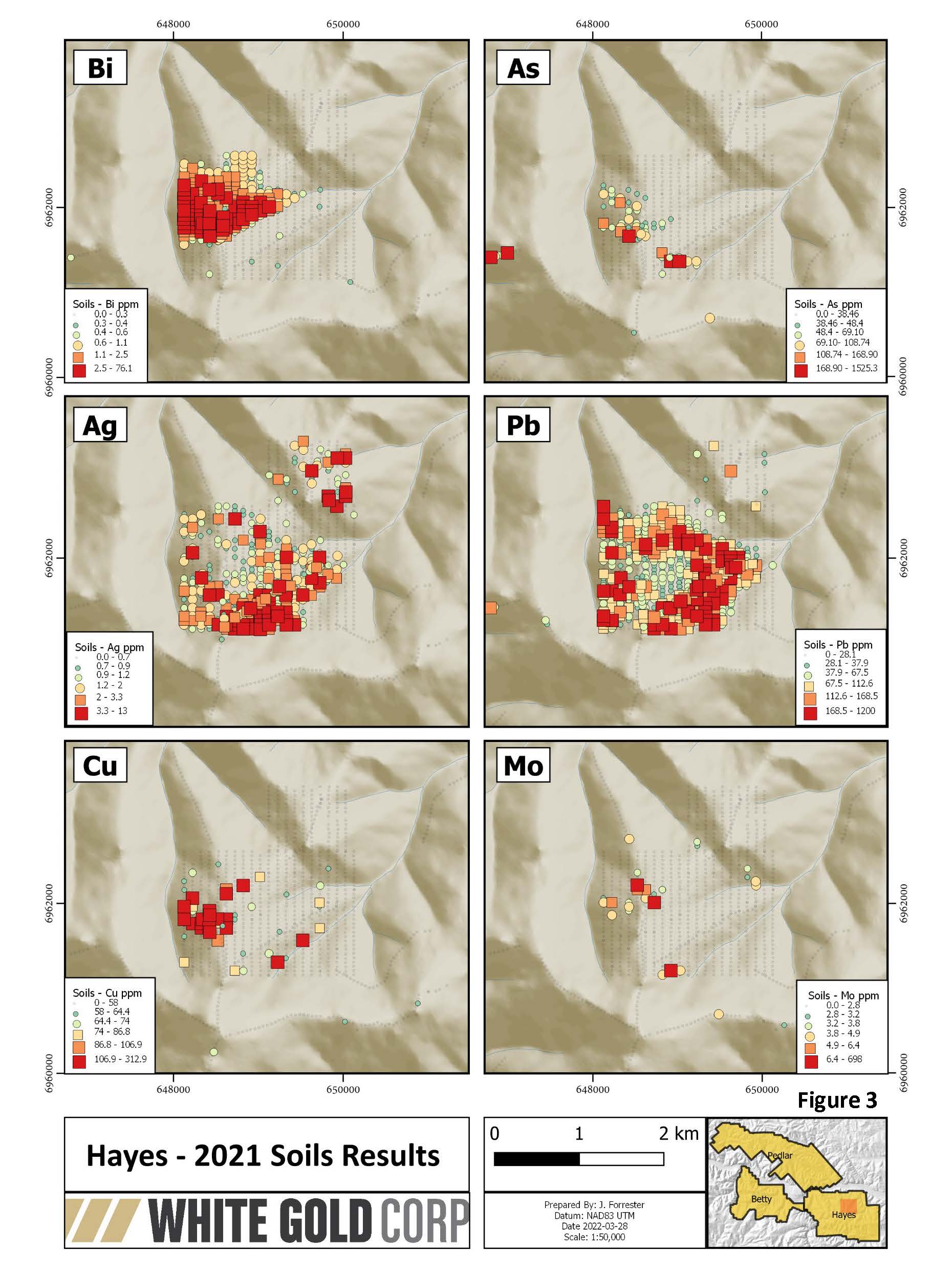 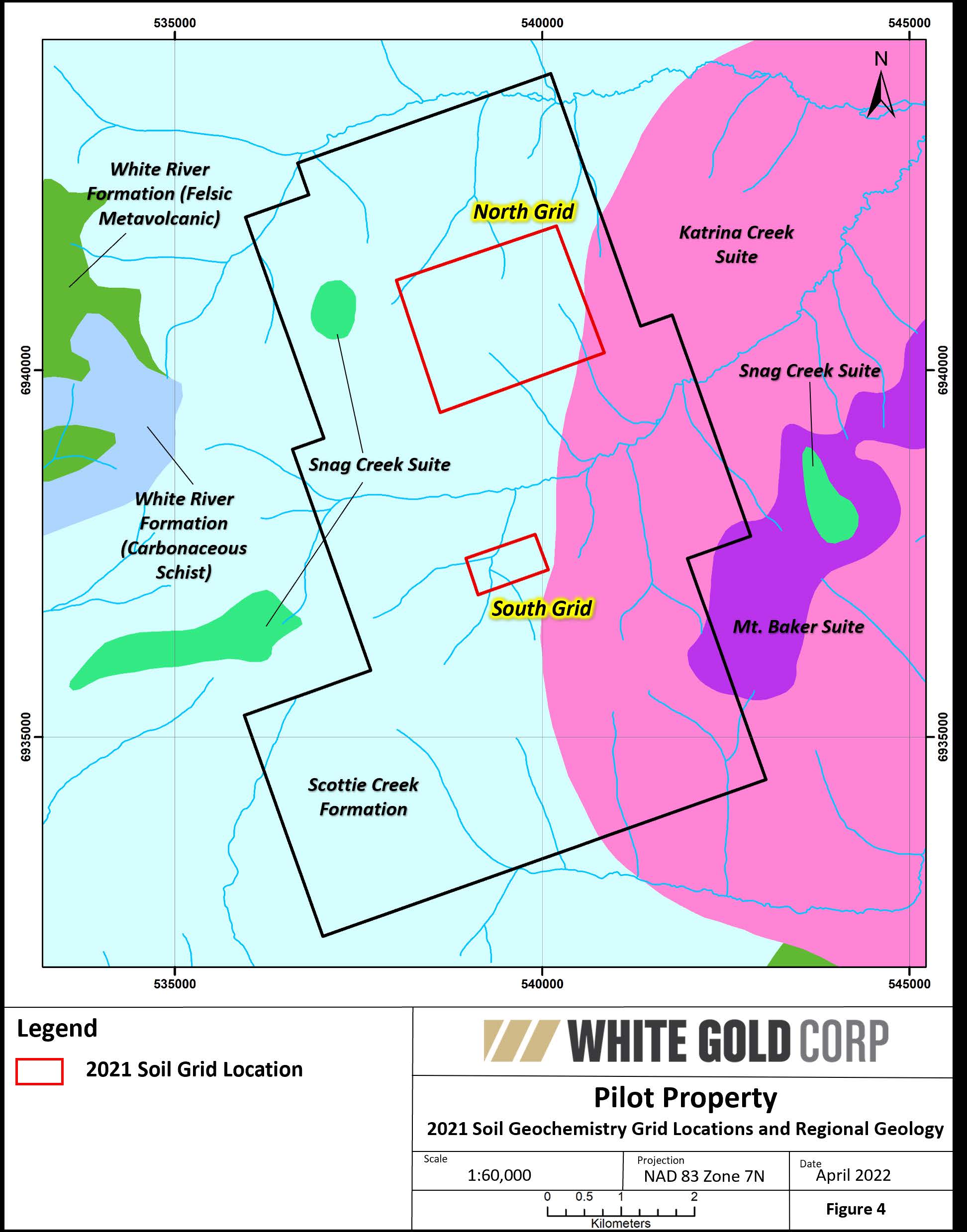 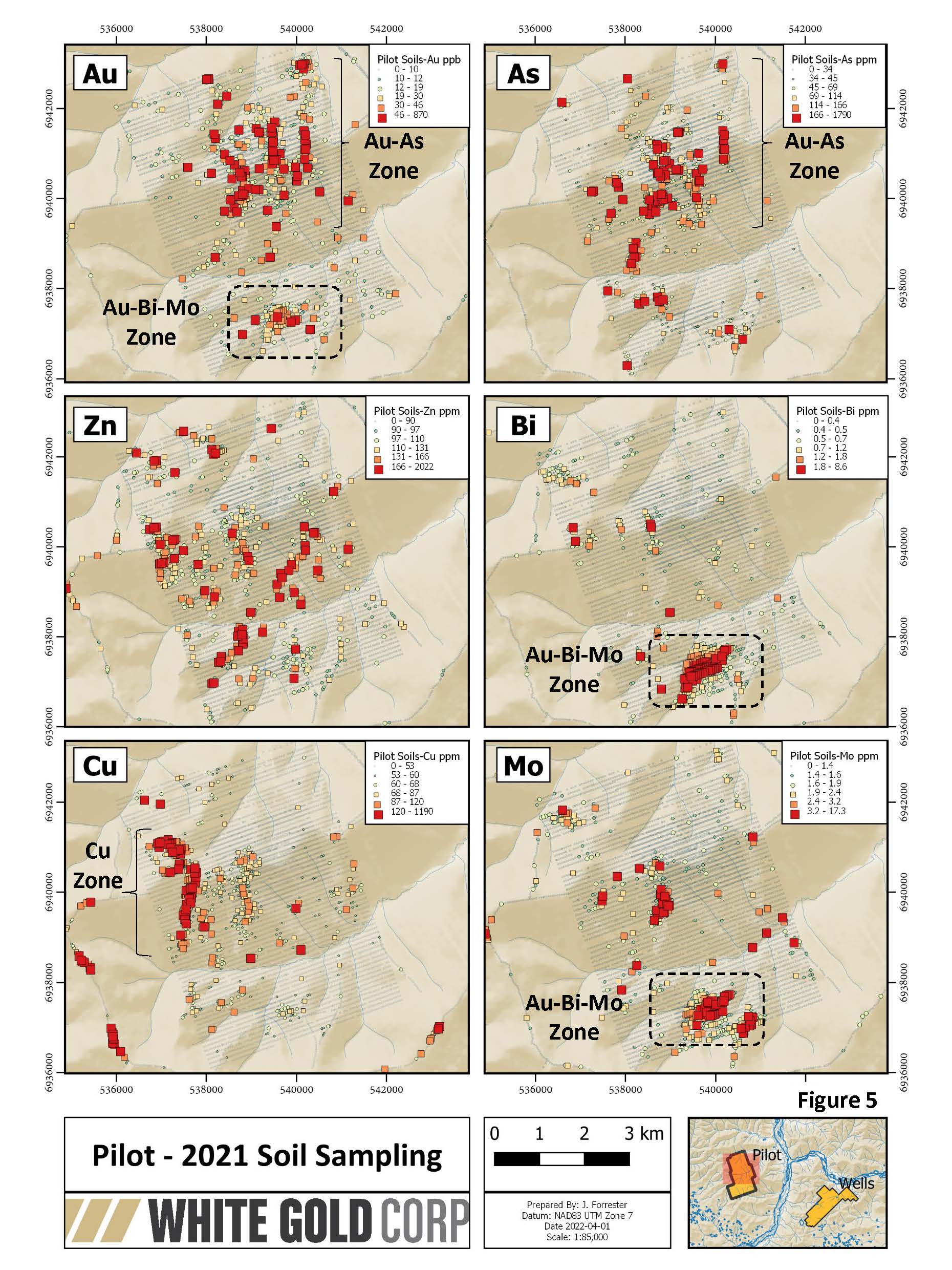 Figures accompanying this news release can be found at: https://whitegoldcorp.ca/investors/exploration-highlights/.

Terry Brace, VP Exploration stated, “Our regional exploration program normally constitutes a significant portion of our annual exploration budget and has continued to identify prospective new targets across our large district scale land package. Given the lack of rock outcrop and the unglaciated terrane in this part of the Yukon, soil sampling has proven to be an extremely effective early-stage exploration tool as demonstrated by these latest results. Our goal is to continually add new targets to our exploration pipeline and advance those of merit to the drill-ready stage”.

“All of the significant grass roots discoveries in the White Gold District were initially identified through soil sampling. The discovery of these and other soil anomalies through our regional exploration program continues to highlight the prospectively of this underexplored district. We are encouraged by these results, especially with respect to their proximity to other significant deposits and new discoveries and are eager to follow up”, stated David D’Onofrio Chief Executive Officer

The geology of the Hayes property is known mainly from regional scale geological mapping by the Geological Survey of Canada and Yukon Geological Survey, aided by regional aeromagnetic interpretations. The oldest rocks occur in the southern part of the property and comprise metasedimentary rocks of the pre-Late Devonian age Snowcap assemblage. These are thrust over felsic to mafic granitoids and orthogneiss of the Mississippian Simpson Range suite along the Yukon River Thrust and underlie the northern portion of the property. In the southwestern part of the property, the Snowcap assemblage is intruded by Middle Cretaceous granitoids of the Dawson Range Batholith, and in the northern part of the property plugs of the Late Cretaceous Prospector Mountain suite intrude the Simpson Range suite. The oldest known fault structure is the west to west-northwest trending Yukon River Thrust which transects the central part of the property. Major east-west striking faults, including an eastern extension of the dextral strike-slip Coffee Creek Fault in the south, also cut through the property. The northwest-trending Big Creek Fault, a relatively late major regional strike-slip fault cuts the western part of the property and is recognized as a controlling structure to many important mineral deposits in the district.

The 2021 soil geochemistry program comprised sampling on 3 separate grid areas on the property, north, south and eastern grids (Figure 2). A total of 1,200 soil samples were collected at 50 m sample intervals on 100 m spaced survey lines. The most encouraging results were returned from the northern grid which measures 2 km east-west by 1.5 km north-south and lies approximately 5 km south of the Yukon River (Figure 3). The area was selected for gridded soils to follow up on isolated anomalous ridge and spur soil samples that formed part of a 2017 reconnaissance survey by the Company. The 2021 sampling identified a broad geochemically zoned multi-element soil anomaly with a central core measuring from 750 m to 1,000m in diameter and enriched in bismuth and arsenic, which is surrounded by a halo of anomalous silver, lead and zinc that is greater than 400 m wide. Anomalous copper occurs in the southern portion of the core, and a relatively small area of anomalous molybdenum occurs near the core’s northern margin. Geologically the soil anomaly is associated with a plug of Late Cretaceous Prospector Mountain suite, which is known to be prospective for porphyry Cu-Au (Mo) and epithermal style mineralization. The soil anomaly overlies a magnetic high, and based on regional geological mapping and aeromagnetic results, similar intrusions occur in the immediate area and have not been covered by soil sampling. The anomaly remains completely open to the west, and currently additional soil sampling is being planned to outline the full extent of the anomaly. The geochemical zonation and elemental distributions indicate that the anomaly may represent the surface expression of a Cu-Mo porphyry core surrounded by epithermal style Ag-Pb-Zn mineralization.

The geology of the Pilot property is known primarily from regional geological mapping by the Geological Survey of Canada and the Yukon Geological Survey. The western part of the property is underlain by the Late Devonian age and older Scottie Creek formation, a metasedimentary sequence comprising mainly quartzites and psammitic schists. The eastern part of the property is underlain by the Late Cretaceous age Katrina Creek suite which comprises granodiorite and monzogranite. At the southeastern corner of the property, the Katrina Creek suite intrudes older meta-intrusive orthogneiss of the Late Devonian Mount Baker Suite. Isolated units of the Upper Triassic Snag Creek suite, which comprises gabbro to diabase, occur within the Scottie Creek formation and Mount Baker suite.

A northern portion of the current Pilot property was originally staked in 2000 by Teck Cominco Limited (now Teck Resources Limited) based on anomalous gold in regional stream silt samples and follow-up reconnaissance soil sampling which identified anomalous gold and arsenic values. Limited follow-up soil sampling (52 samples) by Teck in 2001 identified anomalous Au-As and Cu-Pb-Zn values, although anomalies were generally poorly defined due to the relatively small number of samples.

Since acquiring the Pilot property in 2016, White Gold Corp. has significantly expanded the soil sampling coverage with a total of 8,434 samples collected by the Company. This includes 1,015 infill soil samples taken in 2021 (Figure 4) on two separate grids which covered known soil anomalies, a larger northern grid (1,800 m by 2,250 m) and a smaller grid (400 m x 900 m) located in the central part of the property. Previous soil sample coverage consisted of 50 m spaced samples on 100 m spaced survey lines, and the new infill sampling now provides much better resolution with 25 m sample spacings.

Soil sampling has identified 3 geochemically distinct zones: 1) gold-arsenic zone; 2) copper zone; and 3) gold-bismuth-molybdenum zone (Figure 5). The Au-As zone comprises several subparallel N-S trending Au-As anomalies that appear to be structurally controlled and individual anomalies can be traced for over 1 km along strike. The copper zone is located approximately 1 km west of the Au-As zone and consists of an arcuate shaped 2 km long Cu anomaly. This arcuate shape is also mirrored in the westernmost Au-As anomaly and indicates that similar structural and/or stratigraphic controls may be present. The Au-Bi-Mo anomaly is located approximately 2 km to the south in the central portion of the property and is more circular in shape. The source of the soil anomalies is presently unknown due to a lack of detailed geological mapping and prospecting, and complete lack of trenching and/or drilling. Geologically the Au-As anomalies are underlain by metasediments of the Scottie Creek formation. Although no major fault structures have been mapped in the immediate area of the property, aeromagnetic surveys over the northern half of the property indicate the presence of north-south trending structures that may be controlling mineralization. Mapping and prospecting, and GT Probe and/or mechanical trenching is required to identify the bedrock source of the anomalies. If results of this work are encouraging, initial RAB drilling will test the anomalies to determine the general thickness and grade of mineralization.

The Company is currently in the detailed planning stage of the 2022 exploration program, details of which will be announced in the coming weeks.

Sampling Methods and Analysis
All 2021 soil geochemistry surveys were contracted to GroundTruth Exploration Inc. of Dawson City, Yukon. Field technicians navigated to pre-planned sample sites using handheld GPS units and collected C-Horizon soil samples using an Eijklcamp brand hand auger at a depth of between 20cm and 110 cm. Typically, 400 to 500 g of soil is placed in a pre-labeled bag, and a field duplicate sample is taken once every 25 samples. The GPS location of the sample site is recorded with the GPS unit, and the waypoint location is labeled with the project name and the sample identification number. A weather-proof handheld device equipped with a barcode scanner is used in the field to record the descriptive attributes of the sample collected, including sample identification number, soil colour, soil horizon, slope, sample depth, ground and tree vegetation, sample quality, and any other relevant information.

Analytical work for the 2021 soil geochemistry surveys was carried out at Bureau Veritas (BV) Canada, with preparation completed at their Whitehorse, YT facility and analysis at their hub laboratory located in Vancouver, BC. All soil samples were assayed for gold and a 37 multi-element suite using 0.25g aqua-regia digestion and ICP-MS analysis (Code AQ201). BV is an ISO 9001:2008 accredited facility, certificate number FM63007.

Terry Brace, P.Geo. and Vice President of Exploration for the Company is a “qualified person” as defined under National Instrument 43-101 – Standards of Disclosure of Mineral Projects and has reviewed and approved the content of this news release.

the expected benefits to the Company relating to the exploration conducted and proposed to be conducted at the White Gold properties; the receipt of all applicable regulatory approvals for the Offering; failure to identify any additional mineral resources or significant mineralization; the preliminary nature of metallurgical test results; uncertainties relating to the availability and costs of financing needed in the future, including to fund any exploration programs on the Company’s properties; business integration risks; fluctuations in general macroeconomic conditions; fluctuations in securities markets; fluctuations in spot and forward prices of gold, silver, base metals or certain other commodities; fluctuations in currency markets (such as the Canadian dollar to United States dollar exchange rate); change in national and local government, legislation, taxation, controls, regulations and political or economic developments; risks and hazards associated with the business of mineral exploration, development and mining (including environmental hazards, industrial accidents, unusual or unexpected formations pressures, cave-ins and flooding); inability to obtain adequate insurance to cover risks and hazards; the presence of laws and regulations that may impose restrictions on mining and mineral exploration; employee relations; relationships with and claims by local communities and indigenous populations; availability of increasing costs associated with mining inputs and labour; the speculative nature of mineral exploration and development (including the risks of obtaining necessary licenses, permits and approvals from government authorities); the unlikelihood that properties that are explored are ultimately developed into producing mines; geological factors; actual results of current and future exploration; changes in project parameters as plans continue to be evaluated; soil sampling results being preliminary in nature and are not conclusive evidence of the likelihood of a mineral deposit; title to properties; ongoing uncertainties relating to the COVID-19 pandemic; and those factors described under the heading "Risks Factors" in the Company's annual information form dated July 29, 2020 available on SEDAR. Although the forward-looking statements contained in this news release are based upon what management of the Company believes, or believed at the time, to be reasonable assumptions, the Company cannot assure shareholders that actual results will be consistent with such forward-looking statements, as there may be other factors that cause results not to be as anticipated, estimated or intended. Accordingly, readers should not place undue reliance on forward-looking statements and information. There can be no assurance that forward-looking information, or the material factors or assumptions used to develop such forward-looking information, will prove to be accurate. The Company does not undertake to release publicly any revisions for updating any voluntary forward-looking statements, except as required by applicable securities law.

To Book a Meeting with Management: https://whitegoldcorp.ca/contact/request-information/