A map showing the location of all the Company’s properties is provided here: NOL & other Early-Stage properties

The Nolan property is located approximately 50 km west of Dawson City in west-central Yukon, approximately 15 km east of the Alaska border. The claims are situated in the active Sixtymile placer gold camp, which has produced over 500,000 ounces of placer gold to date. The northern portion of the property north of the Sixty Mile River is accessible from the Top of the World Highway which extends westwards from Dawson City to Alaska, and local placer mining roads and trails. Access to the central and southern areas of the property is accessible by helicopter. 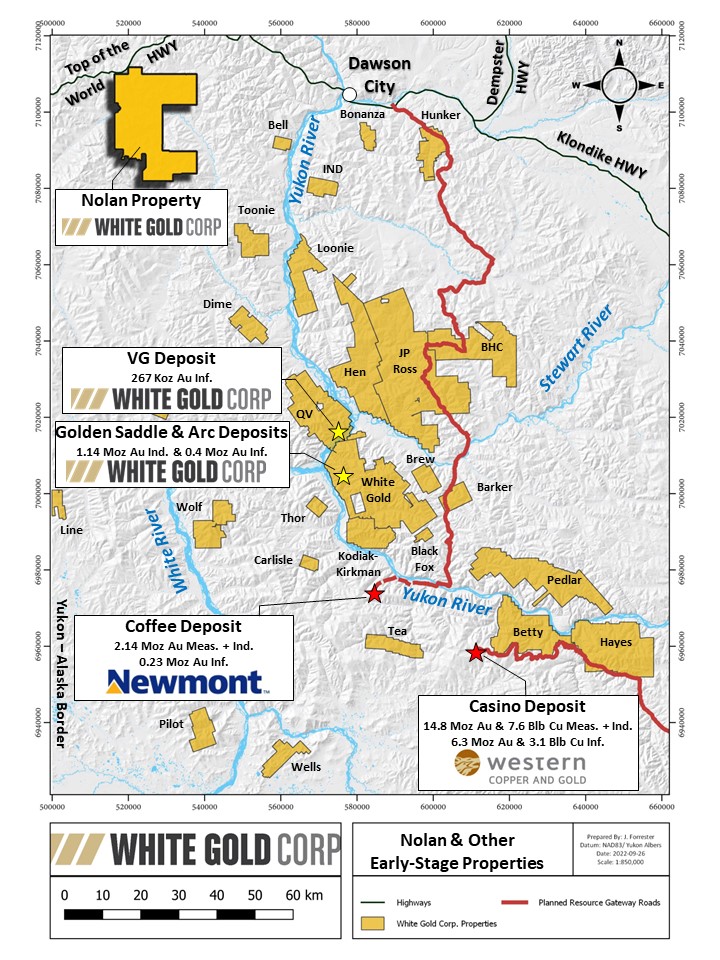 Terry Brace, P.Geo. and Vice President of Exploration for the Company is a “qualified person” as defined under National Instrument 43-101 – Standards of Disclosure of Mineral Projects and has reviewed and approved the content of this project summary.

The Nolan property is underlain primarily by Late Devonian to Early Carboniferous (Mississippian) rocks of the Simpson Range and Finlayson assemblages. The Simpson Range comprises meta-intrusive (diorite, granodiorite and tonalite) orthogneisses and is most widespread in the eastern and central areas of the property. The northern and western portions of the property are underlain by the Finlayson Assemblage. In the north, Finlayson rocks consist of dark grey to black carbonaceous metasedimentary rocks including metaquartzite, and in the central- to southwestern part of the property the Finlayson comprises intermediate to mafic volcanic and volcaniclastic rocks. These units are overlain by younger Late Cretaceous volcanic rocks of the Carmacks Group, which comprises basalt, breccia, andesite, porphyry, dacite and trachyte. On the Nolan property, the Carmacks Group is restricted to the Mount Hart area in the south, where a conglomerate unit forms its base. More extensive areas of the Carmacks Group occur immediately west of the property, as well as to the east and southeast. Late Cretaceous intrusive rocks of the Prospector Mountain Suite, comprising granite, granodiorite, diorite and monzonite, form a series of east-west trending plutons extending westwards from Mount Hart. The most prominent fault structure recognized on the Nolan property is an interpreted extension or splay of the Sixtymile-Pika Fault, a regional 150 km long northeast trending strike-slip sinistral-normal fault that extends westward into Alaska. The Sixtymile-Pika Fault is an important structure, having controlled Late Cretaceous porphyry, skarn and epithermal style mineralization. The Cali target located in the north-central part of the property lies directly on or adjacent to the Sixtymile-Pika Fault, as do several other gold occurrences located west of the property.

The Cali target forms a large 250 m x 2.5 km long northeast-trending multi-element (Au-As-Sb-Bi-Cu-Pb-Zn) soil anomaly, including maximum values of 515 ppb Au, 1436 ppm As, 2184 ppm Cu, 1225 ppm Pb and 2670 ppm Zn. The strongest base metal values appear to occur in sub-zones within the larger anomaly, which remains open along strike particularly to the southwest. The soil anomaly is located over footwall orthogneisses on the south side of the Sixtymile-Pika Fault, and mineralization does not appear to extend into the hanging wall metaquartzites. In 2017 the Company drilled 22 short (< 100 m) RAB holes on the Cali target, with several holes intersecting anomalous gold, silver and copper which warrants follow up exploration including diamond drilling.

In the northeastern portion of the Boucher target soil grid, there is a somewhat annular Cu-Mo-Au-Bi anomaly with values up to 2171 ppm Cu, 44 ppm Mo, 165 ppb Au and 39 ppm Bi. The area of anomalous copper measures approximately 900 m north-south x 700 m east-west. The underlying geology of the Boucher area is not well known due to a lack of outcrop; however, the metal association is indicative of a porphyry Cu-Mo-Au mineralizing system.

Extensive soil sampling has outlined a large multi-element soil geochemistry anomaly in the Mount Hart target area measuring 5 km north-south and up to 3.5 km east-west with values of up to 1120 ppb Au, 14.8 ppm Ag, 1543 ppm As, 81 ppm Sb, 42.2 ppm Bi and 1677 ppm Pb. The relationship between the distribution of individual elements is currently being assessed in the context of underlying geology, including lithologies and structures, and geophysics. Several areas are anomalous in gold only, while elsewhere there are strongly coincident Ag, As, Sb, Bi and Pb anomalies. Anomalous Cu and Mo in the Mount Hart area, combined with observed porphyry-style hydrothermal alteration, indicate the potential for buried porphyry Cu-Mo-Au mineralization. The majority of anomalous soil samples are underlain by rocks of the Late Cretaceous Carmacks Group and coeval intrusions of the Late Cretaceous Prospector Mountain Suite which underly the west-central portion of the Mount Hart soil grid, suggesting a link to a Late Cretaceous mineralizing event.