Located in the central part of the JP Ross property approximately 75 km south of Dawson City and 360 km northwest of Whitehorse in west-central Yukon. The Property is road accessible from Dawson City, and Henderson airstrip located 6.5 km to the north provides small fixed-wing plane access. 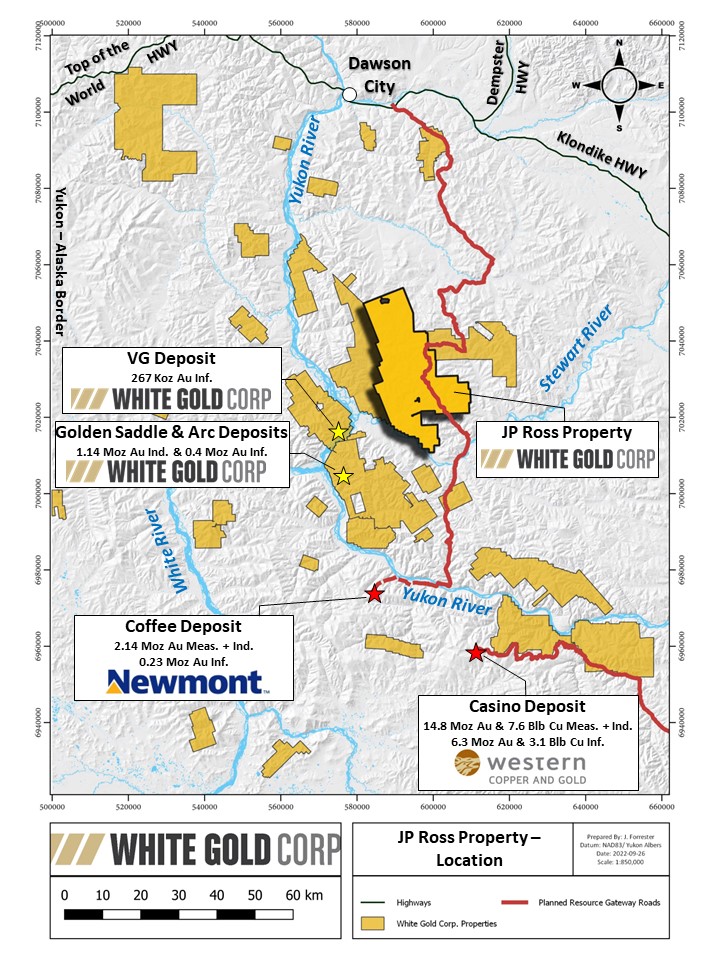 Terry Brace, P.Geo. and Vice President of Exploration for the Company is a “qualified person” as defined under National Instrument 43-101 – Standards of Disclosure of Mineral Projects and has reviewed and approved the content of this project summary.

Highlights of the RAB and RC drilling included:

The 2019 diamond drill holes were drilled predominantly to the north-northeast (020° azimuth) to test the interpreted steep southerly dip. Highlights included:

Since 2019, exploration work at the Vertigo target area has been limited. In 2020, 6 trenches were excavated as part of a phase 1 and phase 2 trenching program on the JP Ross property. During phase 1, an 8-ton tracked excavator dug 4 trenches at Vertigo and during phase 2, a small CanDIG mini excavator dug 2 trenches. The phase 1 trenches exposed narrow mineralized oxidized and vuggy quartz veins which graded 4.51 g/t Au over 1.5 m in trench JPRVER20T016, 0.91 g/t Au over 2.0 m in JPRVER20T017 and 2.78 g/t Au over 1.8 m in JPRVER20T018. Phase 2 trenching produced the most encouraging results with trench JPRVER20T020 returning 2.16 g/t Au over 21.0 m which included two higher grade subzones of 5.69 g/t Au over 3.0 m and 4.15 g/t Au over 5.0 m. The trench ended in mineralization to the south, so the zone remains open in that direction. This latter mineralization is associated with a southeast-trending gold-in-soil anomaly that remains open along strike to the southeast. Also in 2020, a single RAB hole was drilled at Vertigo with hole JPRVER20RAB-026 intersecting a zone grading 1.82 g/t Au over 3.05 m from 1.52 m.

In the coming months, the Vertigo data will be reviewed to help plan next steps which if warranted, may include additional drilling to test the interpreted southeast extension of the Vertigo zone, as well as on the main zone itself.

Note: All reported widths are those measured along the length of the drill hole and/or trench. True widths are currently unknown.