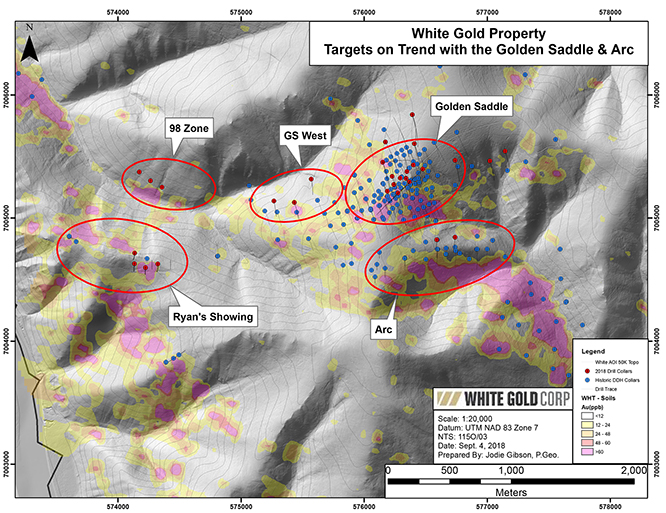 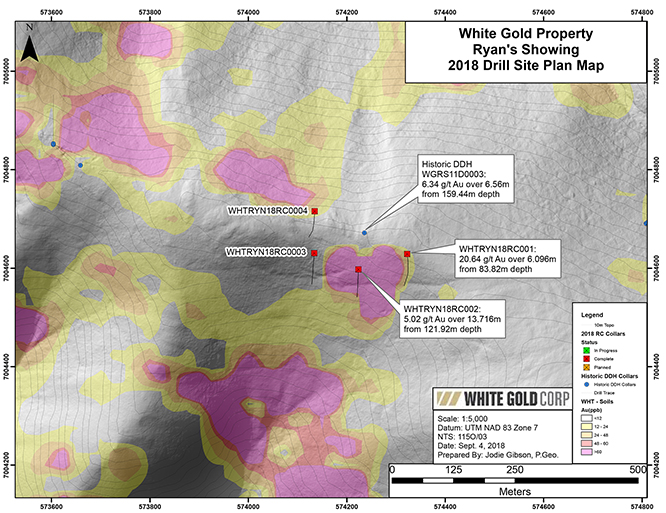 White Gold Corp. (TSX.V: WGO, OTC – Nasdaq Intl: WHGOF, FRA: 29W) (the "Company") is pleased to announce that high-grade gold mineralization has been discovered at shallow depths on multiple drill holes on the Ryan’s Showing Target, located along trend with the Company’s flagship Golden Saddle deposit 2 KM to the west. The drill holes were completed using Reverse Circulation (“RC”) drilling which is used by the Company to drill shallow, sub-200m holes more cost efficiently than traditional exploration. The drilling was part of the Company’s 14,500m drill program focused on expansion of the existing gold resource on the White Gold property. This program includes expansion of the Golden Saddle deposit and exploration of nearby targets such as the Ryan’s Showing. A diamond drill will be moved to the discovery site to perform additional exploration. Images to accompany this news release can be found at http://whitegoldcorp.ca/investors/exploration-highlights/.

“We are very excited about the discovery of a significant new high-grade gold zone 2 KM from the Golden Saddle. We have recognized the potential of satellite deposits near the Golden Saddle which would have the potential to greatly increase the size of the Company’s resource,” stated Jodie Gibson, VP Exploration of the Company.  “This is one of many promising targets on the White Gold property tested this year and we are looking forward to the additional results in due course.”

The Ryan’s Showing is located approximately 2km west of the Golden Saddle deposit on the White Gold property and consists of gold in soil anomalies (trace to 1576 ppb Au) associated with a distinct east-west oriented, north dipping, structure visible in Lidar imagery, DIGHEM, and IP-Resistivity. One historic drill hole(1) in the area (WGRS11D0003) was drilled subparallel to the structural trend approximately 200m north west of WHTRYN18RC0001 which returned 6.34 g/t Au over 6.56m from 159.44m depth; indicating the potential for high grade mineralization in the area which has been confirmed by holes WHTRYN18RC0001 and WHTRYN18RC0002. The area along trend from the Golden Saddle deposit to the Ryan Showing has been historically unexplored. In 2018, the Company has performed some additional exploration along trend and results will be released in due course.

Follow-up diamond drilling is planned for the target and will be commenced during the 2018 season.

Significant drill results from the Ryan Showing are detailed in the table below.

There is not currently enough information to estimate true thickness of the mineralization at this time.

The White Gold Property is located 95km south of Dawson City, Yukon. The property’s 1,792 claims totaling 34,951 hectares are 100% owned by the Company. The property has an airstrip, barge access, and a fully operational 100-person camp. The Yukon Resource Gateway Project funded by the federal and territorial governments will provide year-round road access to the property.

The Company owns a portfolio of 19,606 quartz claims across 30 properties covering over 390,000 hectares representing approximately 40% of the Yukon’s White Gold District. The Company’s flagship White Gold property has a mineral resource of 960,970 ounces Indicated at 2.43 g/t gold and 262,220 ounces Inferred at 1.70 g/t gold as set forth in the technical report entitled “Independent Technical Report for the White Gold Project, Dawson Range, Yukon, Canada”, dated March 5, 2018, filed under the Company’s profile on SEDAR. Mineralization on the Golden Saddle and Arc is also known to extend beyond the limits of the current resource estimate. Regional exploration work has also produced several other prospective targets on the Company’s claim packages which border sizable gold discoveries including the Coffee project owned by Goldcorp Inc. (disclosed M&I gold resource of 4.1M oz) and Western Copper and Gold Corporation’s Casino project (disclosed P&P gold reserves of 8.9M oz Au and 4.5B lb Cu). The Company has outlined an aggressive exploration plan to further explore its properties. For more information visit www.whitegoldcorp.ca.

Jodie Gibson, P.Geo. and Vice President of Exploration for the Company is a “qualified person” as defined under NI 43-101 and has reviewed and approved the content of this news release.

These forward-looking statements are based on reasonable assumptions and estimates of management of the Company at the time such statements were made. Actual future results may differ materially as forward-looking statements involve known and unknown risks, uncertainties and other factors which may cause the actual results, performance or achievements of the Company to materially differ from any future results, performance or achievements expressed or implied by such forward-looking statements. Such factors, among other things, include: the expected benefits to the Company relating to the exploration conducted and proposed to be conducted at the White Gold properties; failure to expand or identify any additional mineral resources; the preliminary nature of metallurgical test results; uncertainties relating to the availability and costs of financing needed in the future, including to fund any exploration programs on the White Gold properties and the Company’s other properties; business integration risks; fluctuations in general macroeconomic conditions; fluctuations in securities markets; fluctuations in spot and forward prices of gold, silver, base metals or certain other commodities; fluctuations in currency markets (such as the Canadian dollar to United States dollar exchange rate); change in national and local government, legislation, taxation, controls, regulations and political or economic developments; risks and hazards associated with the business of mineral exploration, development and mining (including environmental hazards, industrial accidents, unusual or unexpected formations pressures, cave-ins and flooding); inability to obtain adequate insurance to cover risks and hazards; the presence of laws and regulations that may impose restrictions on mining; employee relations; relationships with and claims by local communities and indigenous populations; availability of increasing costs associated with mining inputs and labour; the speculative nature of mineral exploration and development (including the risks of obtaining necessary licenses, permits and approvals from government authorities); the unlikelihood that properties that are explored are ultimately developed into producing mines; geological factors; actual results of current and future exploration; changes in project parameters as plans continue to be evaluated; soil sampling results being preliminary in nature and are not conclusive evidence of the likelihood of a mineral deposit; title to properties; and those factors described under the heading "Risks and Uncertainties" in the Company’s most recently filed management’s discussion and analysis. Although the forward-looking statements contained in this news release are based upon what management of the Company believes, or believed at the time, to be reasonable assumptions, the Company cannot assure shareholders that actual results will be consistent with such forward-looking statements, as there may be other factors that cause results not to be as anticipated, estimated or intended. Accordingly, readers should not place undue reliance on forward-looking statements and information. There can be no assurance that forward-looking information, or the material factors or assumptions used to develop such forward-looking information, will prove to be accurate. The Company does not undertake any obligations to release publicly any revisions for updating any voluntary forward-looking statements, except as required by applicable securities law.