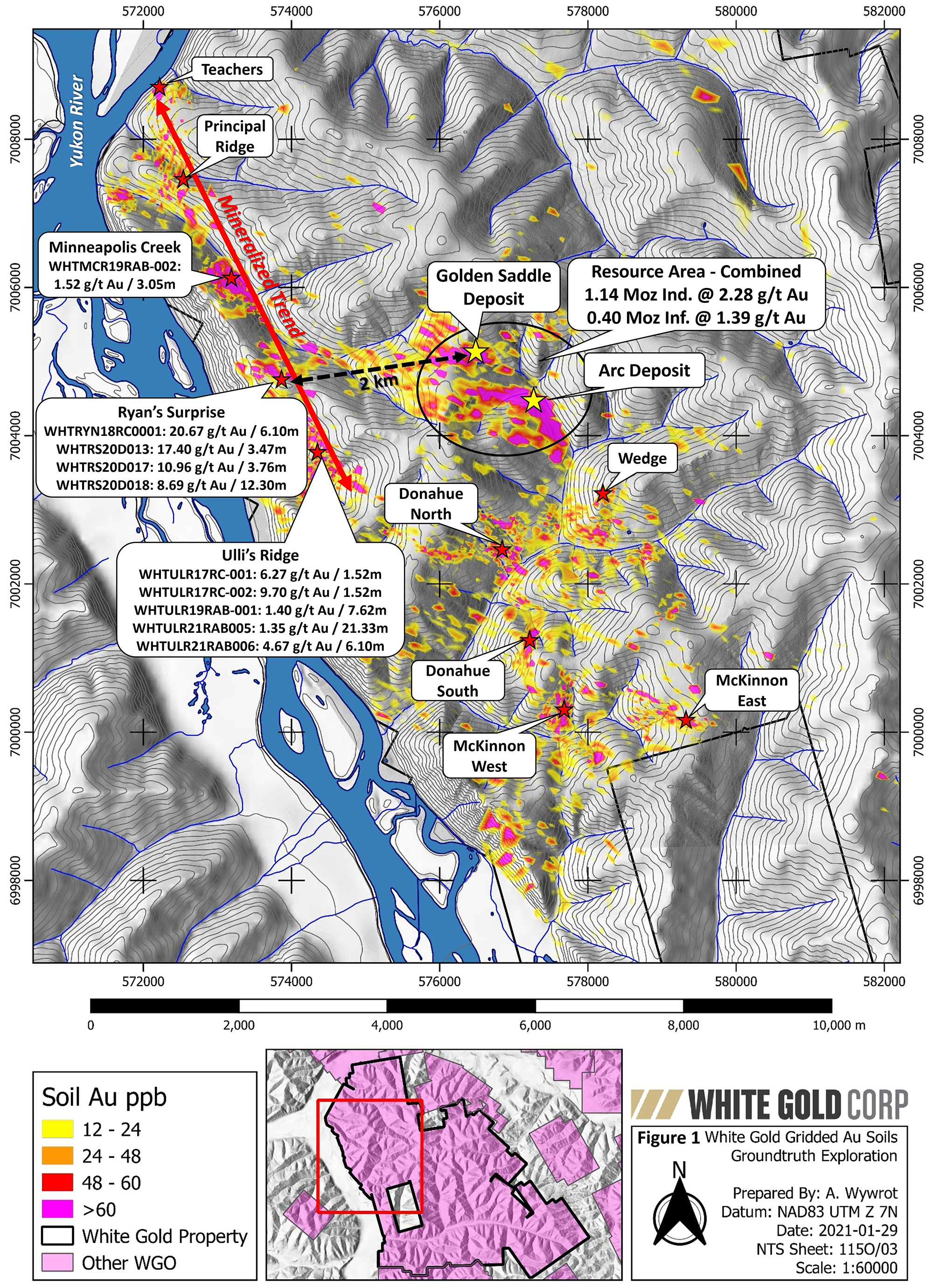 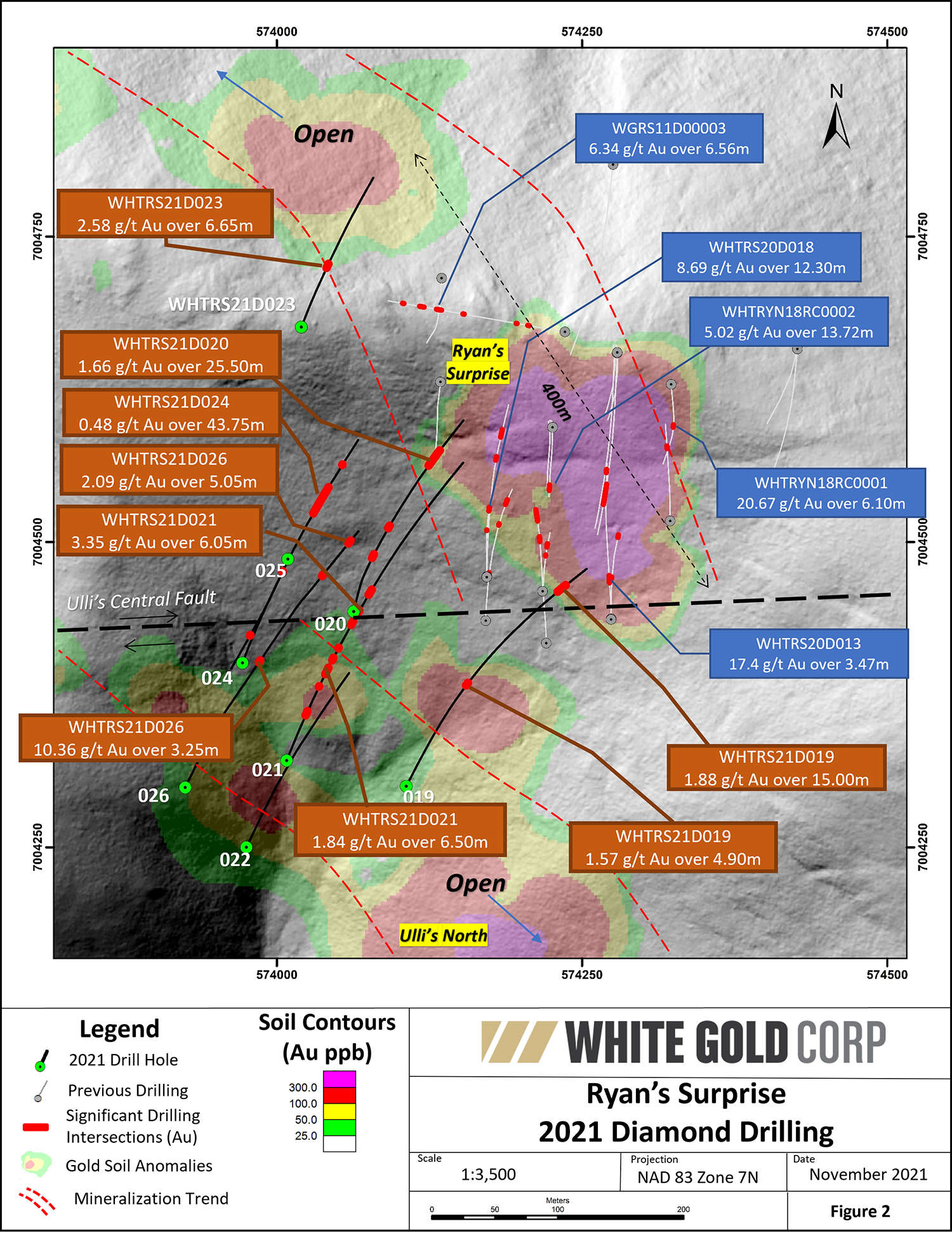 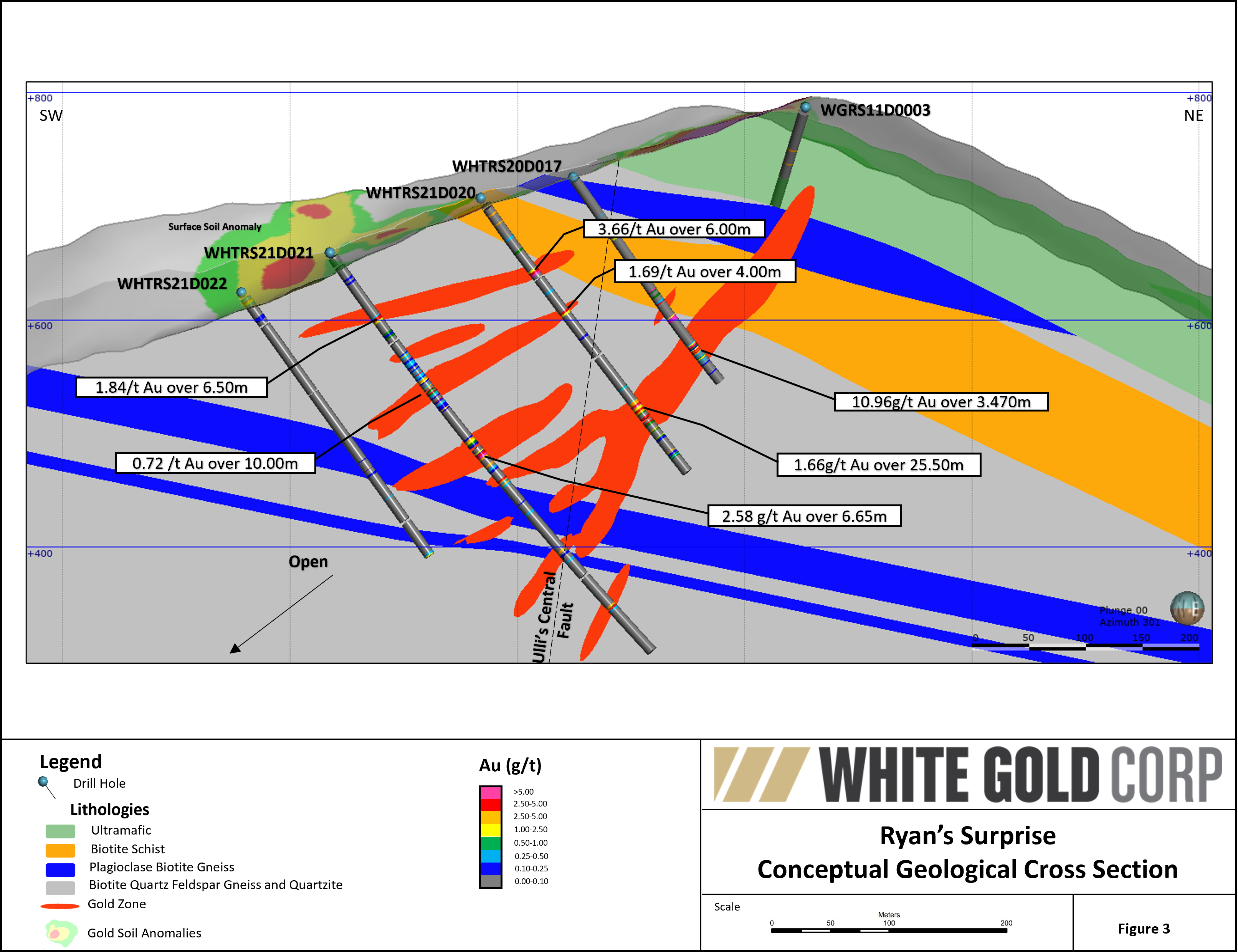 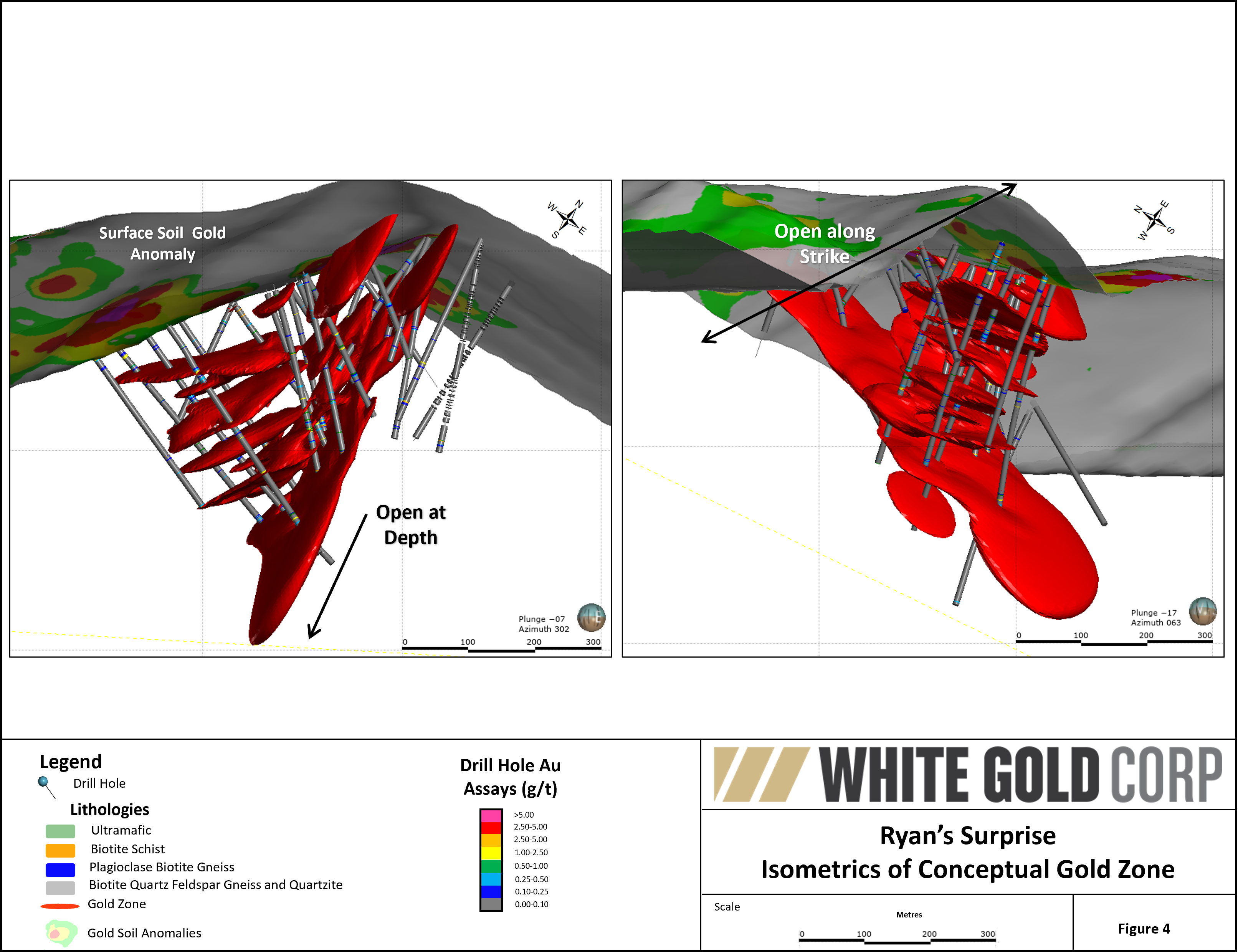 The Ryan's Surprise and Ulli’s Ridge targets are situated on a 6.5 km long x 1.0 km wide, north-south trend of anomalous gold and arsenic in soils, which extends from the Ulli’s Ridge target in the south to the Teacher’s showing in the north (Figure 1). The Ryan’s Surprise target has been a focus of diamond drilling over the past two field seasons, and this year’s drilling has expanded southwards to the Ulli’s Ridge target. The goal of these drill programs is to identify new zones of gold mineralization with the potential to increase the project’s overall gold resource base.

“We are very pleased to have encountered additional zones of significant gold mineralization and further expand the large footprint of mineralization at the Ryan’s Surprise, which remains open in multiple directions. These results continue to demonstrate the expansiveness of gold mineralization in the White Gold district and the potential for continuing to increase our already significant defined resource base. The continued exploration success increases our optimism for the prospectively of our district scale land package and we are looking forward to the results from the other high priority targets tested this year,” stated David D’Onofrio, CEO.

The geology of the Ryan’s Surprise area consists of two primary lithological packages, an upper hanging wall mafic to ultramafic package comprising amphibolite and pyroxenite, and an underlying metasedimentary sequence of metaquartzite, biotite-quartz-feldspar gneiss and minor biotite schist. The contact between the two packages strikes northwest, is relatively flat-lying, and appears to be a possible thrust fault.

Hole WHTRS21D019 was drilled to test the interpreted down-dip extension of high-grade mineralization encountered in 2020 drilling by approximately 65m. Unfortunately, the hole deviated significantly to the east such that the pierce point of the targeted mineralized zone was 50m further east than originally planned. The hole intersected two separate mineralized zones, an upper zone grading 1.57 g/t Au over 4.90m from 177.15m (downhole), and a lower zone which returned 1.88 g/t Au over 15.00m from 370.00m.

At Ryan’s Surprise gold mineralization is structurally controlled by brittle breccia and fracture zones with minor late quartz veining predominantly in the metaquartzites. The north-eastern region of Ryan’s Surprise (Figure 3) which was the primary target of drilling in previous seasons appears to contain multiple steeply southwest dipping gold zones with grades up to 20.67 g/t over 6.10m. To the southwest, results of the 2021 drilling suggest the mineralization occurs within more moderately southeast dipping structures with grades up to 10.36 g/t over 3.25m. The intersection between these two zone orientations appears to define the Ulli’s Central Fault which is interpreted to bisect the target area. Three-dimensional geological modeling of the mineralization (Figure 4) along with the surface soil geochemistry suggests the Ryan’s Surprise zone remains open to the northwest, southeast, and further at depth.

Table 1: Summary of 2021 Diamond Drilling Gold Assay Results at the Ryan’s Surprise and Northernmost Part of the Ulli’s Ridge Target.

Table 2. Collar Details for 2021 Diamond Drill Holes at the Ryan’s Surprise and Northernmost Part of the Ulli’s Ridge Target.

The reported work was completed using industry standard procedures, including a quality assurance/quality control (“QA/QC”) program consisting of the insertion of certified standards, blanks and duplicates into the sample stream.

the expected benefits to the Company relating to the exploration conducted and proposed to be conducted at the White Gold properties; the receipt of all applicable regulatory approvals for the Offering; failure to identify any additional mineral resources or significant mineralization; the preliminary nature of metallurgical test results; uncertainties relating to the availability and costs of financing needed in the future, including to fund any exploration programs on the Company’s properties; business integration risks; fluctuations in general macroeconomic conditions; fluctuations in securities markets; fluctuations in spot and forward prices of gold, silver, base metals or certain other commodities; fluctuations in currency markets (such as the Canadian dollar to United States dollar exchange rate); change in national and local government, legislation, taxation, controls, regulations and political or economic developments; risks and hazards associated with the business of mineral exploration, development and mining (including environmental hazards, industrial accidents, unusual or unexpected formations pressures, cave-ins and flooding); inability to obtain adequate insurance to cover risks and hazards; the presence of laws and regulations that may impose restrictions on mining and mineral exploration; employee relations; relationships with and claims by local communities and indigenous populations; availability of increasing costs associated with mining inputs and labour; the speculative nature of mineral exploration and development (including the risks of obtaining necessary licenses, permits and approvals from government authorities); the unlikelihood that properties that are explored are ultimately developed into producing mines; geological factors; actual results of current and future exploration; changes in project parameters as plans continue to be evaluated; soil sampling results being preliminary in nature and are not conclusive evidence of the likelihood of a mineral deposit; title to properties; ongoing uncertainties relating to the COVID-19 pandemic; and those factors described under the heading "Risks Factors" in the Company's annual information form dated July 29, 2020 available on SEDAR. Although the forward-looking statements contained in this news release are based upon what management of the Company believes, or believed at the time, to be reasonable assumptions, the Company cannot assure shareholders that actual results will be consistent with such forward-looking statements, as there may be other factors that cause results not to be as anticipated, estimated or intended. Accordingly, readers should not place undue reliance on forward-looking statements and information. There can be no assurance that forward-looking information, or the material factors or assumptions used to develop such forward-looking information, will prove to be accurate. The Company does not undertake to release publicly any revisions for updating any voluntary forward-looking statements, except as required by applicable securities law.

To Book a Meeting with Management: https://whitegoldcorp.ca/contact/request-information/