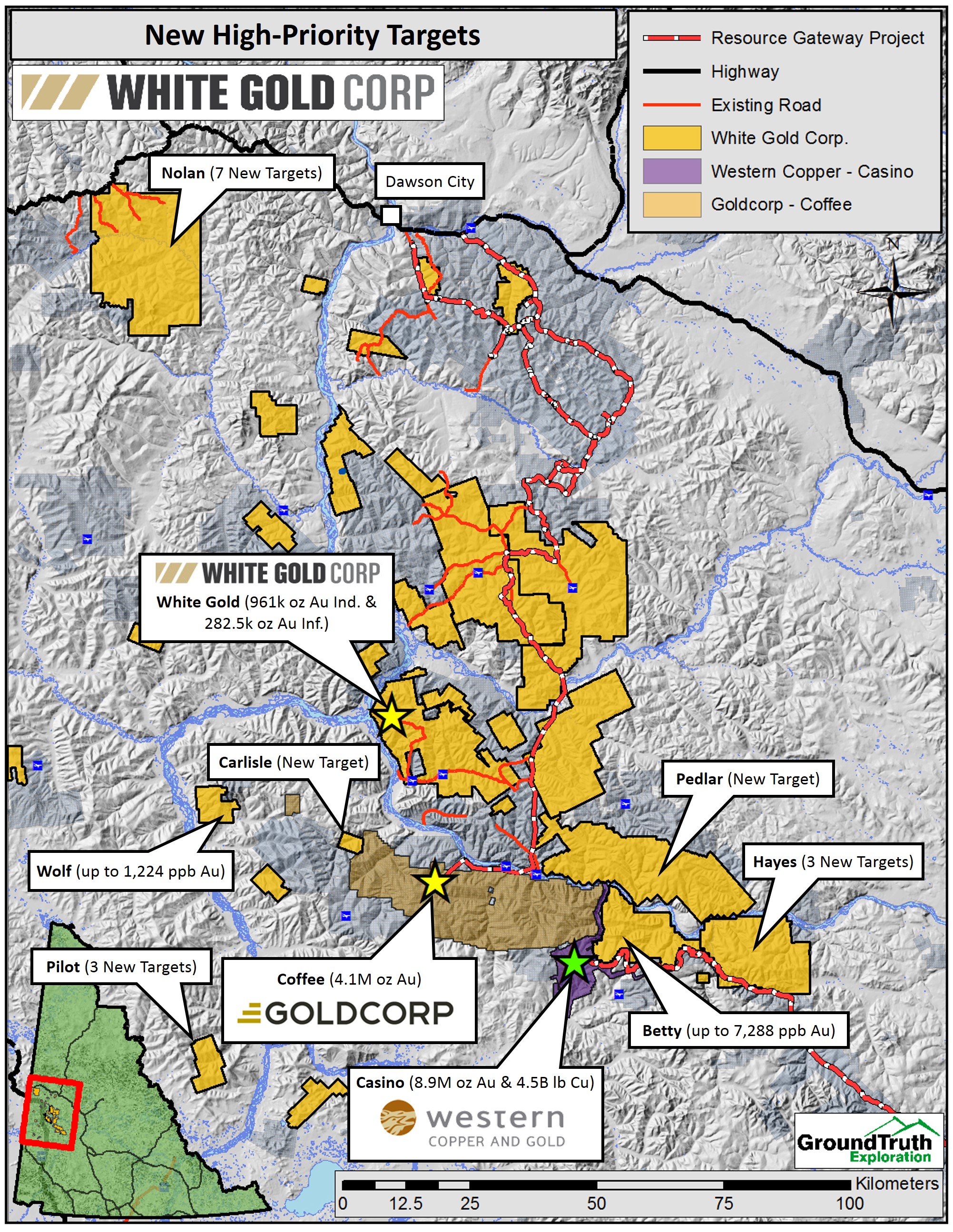 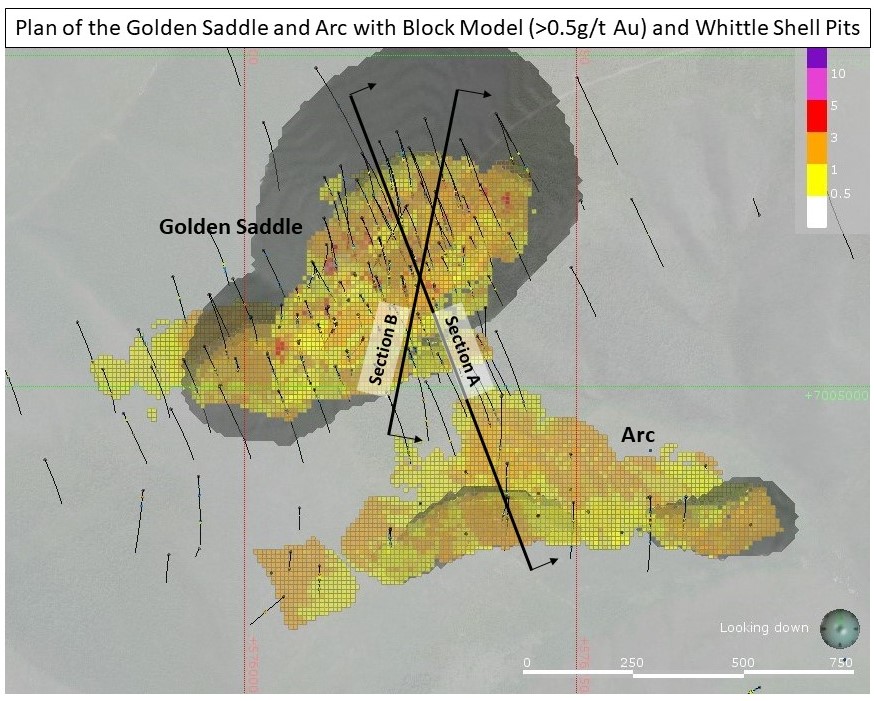 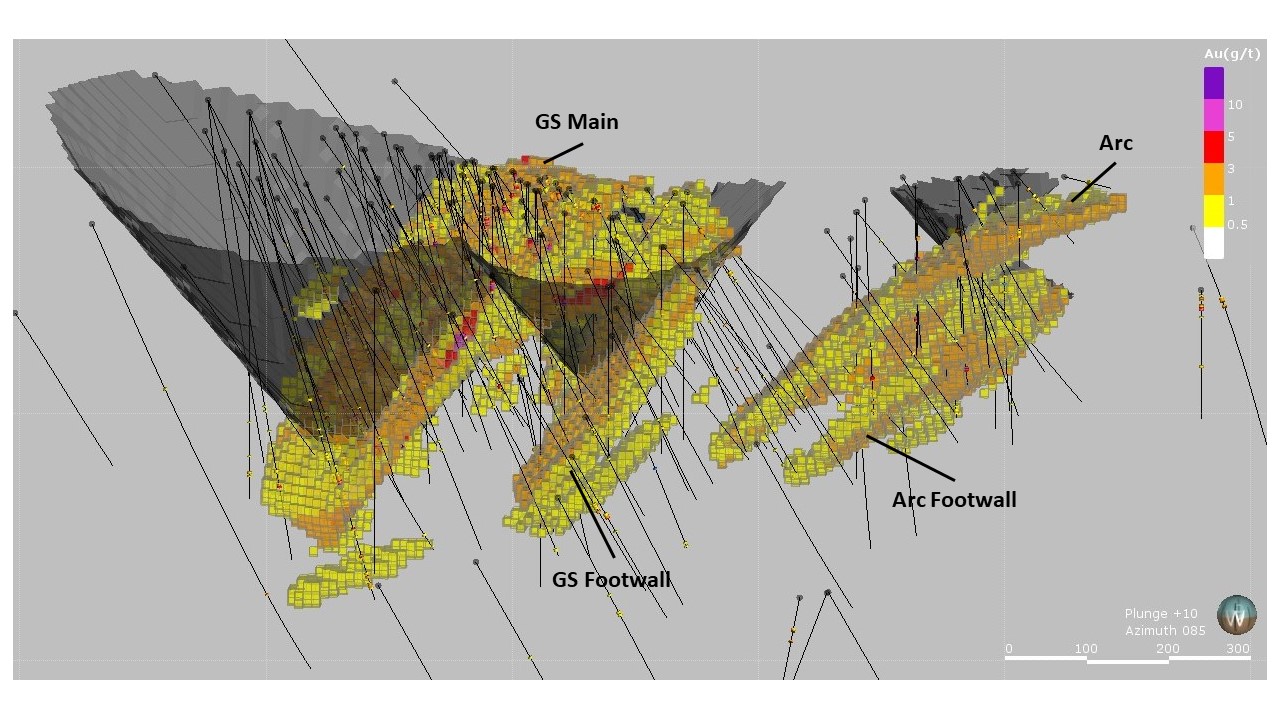 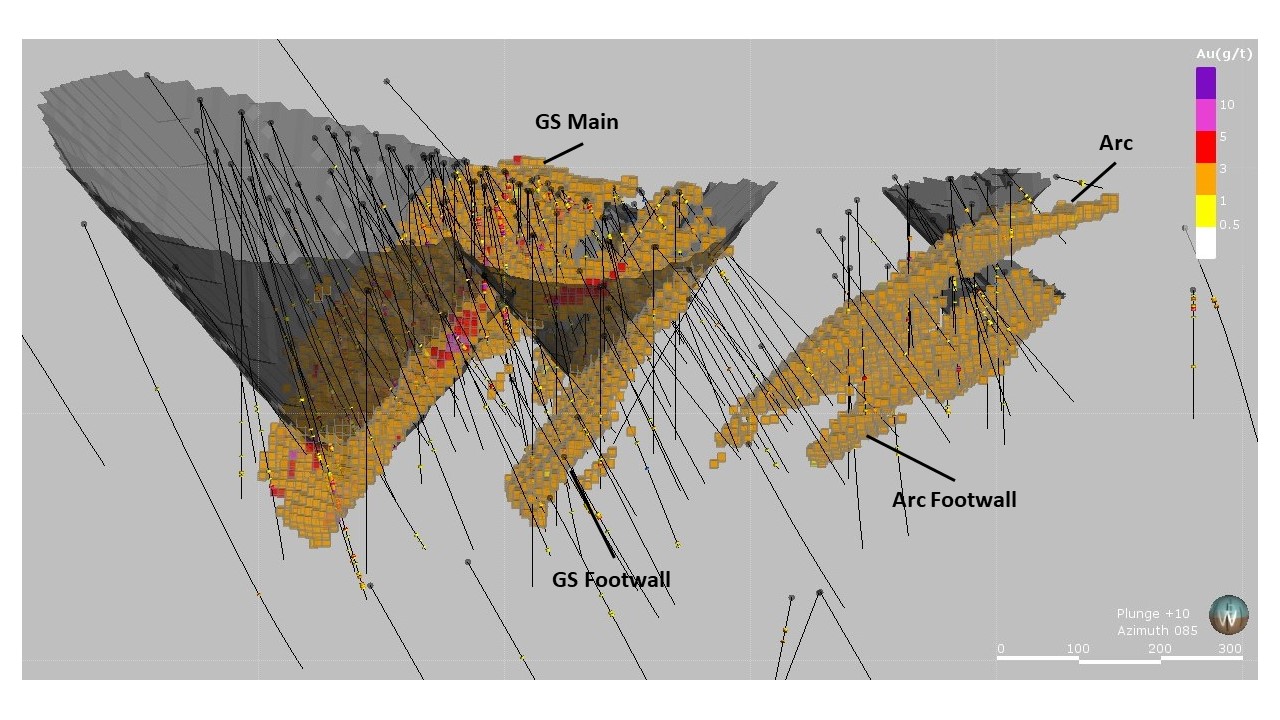 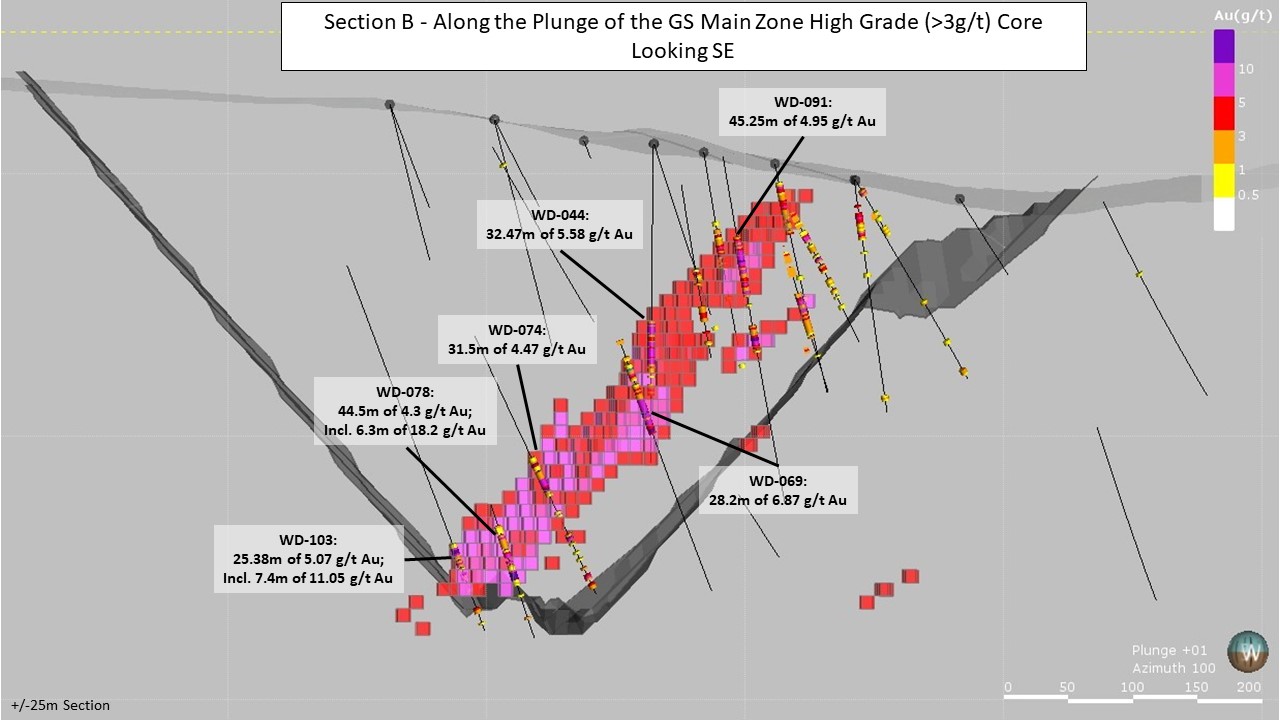 Detailed images of the resource model and additional information can be found at http://whitegoldcorp.ca/investors/exploration-highlights/.

Jodie Gibson, P.Geo., Vice President of Exploration for the Company, commented “We are very pleased with the Mineral Resource estimate on the Golden Saddle and Arc. It provides us with a solid foundation from which we can expand the current mineral inventory in future exploration programs. Particularly exciting is the GS Main which has a remarkably consistent core at grades >3g/t Au that has been traced from surface to approximately 400m depth and is open down dip and down plunge. The Arc also remains open for expansion in all directions and our 2017 program demonstrated a subparallel zone to the Arc.

These results have been achieved with only 44,698m of drilling on the Golden Saddle and 11,911m of drilling on the Arc to date by the Company and previous owners. Combined with the numerous other known exploration targets on the property that have received minimal to no drill testing and the broad advances in our understanding of the regional geology and controls on mineralization, we believe there is significant potential to expand the current resource base and make new discoveries. Furthermore, recent investments into access and infrastructure via the Yukon Resource Gateway project continues to improve the overall economics within the district.

To learn more about our resource and exciting exploration plans, please visit us at booth 2139 and core shack booth 3111 at the 2018 PDAC Convention this week at the Metro Toronto Convention Centre. We welcome anyone who is interested to join us for our corporate presentation on Monday, March 5 at 4:00PM in Room 802.”

The resource estimate was conducted by Arseneau Consulting Services (“ACS”) and is reported within the guidelines of the Canadian Securities Administration National Instrument 43-101 (“NI 43-101”). ACS carried out database verification, grade shell geometry, variography, and ordinary kriging exercises. A database with a total of 3,751 samples from 126 drill holes was used for the Golden Saddle and Arc areas. The Indicated and Inferred mineral resources were classified according to the Canadian Institute of Mining, Metallurgy and Petroleum (“CIM”) definition Standards for Mineral Resources and Mineral Reserves by Dr. Gilles Arseneau, P.Geo., of ACS, a “qualified person” as defined by NI 43-101. The Company intends to publish an updated technical report within 45 days of this news release which will include the resource estimate. The report will be available at that time on SEDAR and the Company’s website.

A block model encompassing all zones was constructed by ordinary kriging using Dassault Systems GEMS software. The model was estimated using 10m x 10m x 10m blocks and grades were estimated in three passes. Pass 1 and 2 were based on variography and had expanding ranges from 50-60m for pass 1 and 110 – 130m for pass 2. Pass 3 estimated blocks that had not been estimated during pass 1 or 2 but were pierced by drill holes. Any blocks estimated during pass 1 by at least three drill holes within a 50m radius were classified as Indicated and all other estimated blocked were classified as Inferred.

Mineral Resources on both the Golden Saddle and Arc are potentially amenable to open pit mining methods. Any mineralized blocks that were not within the pit shells but at a >3g/t cut-off were considered potentially amenable to underground mining methods. All tonnage, grade, and contained metal content estimates have been rounded. Rounding may result in apparent summation difference between tonnage, grade, and contained metal content.

Mineralization on portions of both the Golden Saddle and Arc is known to extend beyond the limits of the current resource estimate, however, the mineralization in these areas does not currently meet the criteria to be classified as Mineral Resources. Based on drilling in these areas and current geologic models this includes an estimated 7 – 10 million tonnes grading between 1 – 1.5 g/t Au. The reader should be cautioned that the potential quantity and grade is conceptual in nature; there has been insufficient exploration to define a mineral resource and it is uncertain if further exploration will result in the target being delineated as a mineral resource.

Within the Golden Saddle, the resource estimate was conducted on three zones, the GS Main; GS Footwall, and GS Upper. Both the GS Main and GS Footwall trend NE-SW and dip to the NW at approximately 55 degrees with mineralization occurring along faults, fractures, and breccia zones in an overall normal to strike-slip structural regime. The GS Upper consists of narrow, discontinuous, zones of mineralization intercepted in drilling above the GS Main and appear to be associated with high angle structures subparallel to lithology in the Golden Saddle. Together, the zones define mineralization over 900m strike length and up to 400m down dip. Mineralization is open along strike and down dip/plunge on both zones.

The GS Main is the most significant in terms of estimated ounces and overall grade; containing approximately 96% of the Indicated ounces within the overall resource. Furthermore, the 101-110 domain is specifically important as it encompasses the core of mineralization within the GS Main; can be consistently be traced from surface to over 400m depth; defines an overall northly plunging ore body; and is open and appears to the increasing in grade with depth. This is highlighted by the grade sensitivity on the GS Main, where over 95% of the contained Indicated ounces are within a cut-off grade of >1 g/t and approximately 57% are within a cut-off grade of >3g/t Au.

(1)            Mineral Resources which are not Mineral Reserves do not have demonstrated economic viability.

Future work on the Golden Saddle in 2018 will focus on the high-grade core of the GS Main and aggressively drill test it with step-outs down dip and down plunge. Additional detailed metallurgical testing will also be performed on the Golden Saddle and an oxide model will be prepared to assess the potential heap leachability of the Golden Saddle mineralization. A detailed exploration plan and finalized budget for the 2018 program on the White Gold property regional exploration portfolio will be reported in due course.

The Arc is located approximately 400m south of the Golden Saddle and consists of two zones, the Arc Main and Arc Footwall zones. Both zones trend E-NE and dip to the north at approximately 50 degrees.  Mineralization at the Arc has been defined over 1,200m in strike length and up to 400m down dip with mineralization open along strike and down dip. Based on historic metallurgical testing(6) and with only limited drilling performed to date, only a small portion of the mineralized zone meets the criteria to be classified as a Mineral Resource at this point in time. Future work to assess the potential economic viability of the Arc will include detailed metallurgical testing and sensitivity analyses using different gold prices, gold recoveries and potentially, mining and processing methods along with additional drilling.

The reported work was completed using industry standard procedures, including a quality assurance/quality control (“QA/QC”) program consisting of the insertion of certified standards, blanks, and field duplicates into the sample stream. Additionally, historic QA/QC data and methodology on the White Gold property were reviewed and are summarized in the “Independent Technical Report for the White Gold Project, Dawson Range, Yukon Canada” by Dr. Gilles Arseneau, P.Geo. dated September 15, 2017 (the “Technical Report”) and available on SEDAR. The qualified persons detected no significant QA/QC issues during review of the data.

Jodie Gibson, P.Geo. and Vice President of Exploration for the Company is a “qualified person” as defined under NI 43-101, and has reviewed and approved the content of this news release.  For further information regarding the White Gold property, please refer to the Technical Report available on SEDAR at www.sedar.com.

The Company owns a portfolio of 19,438 quartz claims across 30 properties covering over 390,000 hectares representing approximately 40% of the Yukon’s White Gold District. The Company’s flagship White Gold property has a mineral resource of 960,970 Indicated and 262,220 Inferred ounces of gold. Regional exploration work has also produced several other prospective targets on the Company’s claim packages which borders sizable gold discoveries including the Coffee project owned by Goldcorp Inc. and Western Copper and Gold Corporation’s Casino project. The Company has outlined an aggressive exploration plan to further explore its properties. For more information visit www.whitegoldcorp.ca.

These forward-looking statements are based on reasonable assumptions and estimates of management of the Company at the time such statements were made. Actual future results may differ materially as forward-looking statements involve known and unknown risks, uncertainties and other factors which may cause the actual results, performance or achievements of the Company to materially differ from any future results, performance or achievements expressed or implied by such forward-looking statements. Such factors, among other things, include: the expected benefits to the Company relating to the exploration conducted and proposed to be conducted at the White Gold properties; failure to identify, upgrade or realize mineral resources; the preliminary nature of metallurgical test results; uncertainties relating to the availability and costs of financing needed in the future, including to fund any exploration programs on the White Gold properties and the Company’s other properties; business integration risks; fluctuations in general macroeconomic conditions; fluctuations in securities markets; fluctuations in spot and forward prices of gold, silver, base metals or certain other commodities; fluctuations in currency markets (such as the Canadian dollar to United States dollar exchange rate); change in national and local government, legislation, taxation, controls, regulations and political or economic developments; risks and hazards associated with the business of mineral exploration, development and mining (including environmental hazards, industrial accidents, unusual or unexpected formations pressures, cave-ins and flooding); inability to obtain adequate insurance to cover risks and hazards; the presence of laws and regulations that may impose restrictions on mining; employee relations; relationships with and claims by local communities and indigenous populations; availability of increasing costs associated with mining inputs and labour; the speculative nature of mineral exploration and development (including the risks of obtaining necessary licenses, permits and approvals from government authorities); the unlikelihood that properties that are explored are ultimately developed into producing mines; geological factors; actual results of current and future exploration; changes in project parameters as plans continue to be evaluated; soil sampling results being preliminary in nature and are not conclusive evidence of the likelihood of a mineral deposit; title to properties; and those factors described under the heading "Risks and Uncertainties" in the Company’s most recently filed management’s discussion and analysis. Although the forward-looking statements contained in this news release are based upon what management of the Company believes, or believed at the time, to be reasonable assumptions, the Company cannot assure shareholders that actual results will be consistent with such forward-looking statements, as there may be other factors that cause results not to be as anticipated, estimated or intended. Accordingly, readers should not place undue reliance on forward-looking statements and information. There can be no assurance that forward-looking information, or the material factors or assumptions used to develop such forward-looking information, will prove to be accurate. The Company does not undertake any obligations to release publicly any revisions for updating any voluntary forward-looking statements, except as required by applicable securities law.