NOT FOR DISSEMINATION IN THE UNITED STATES OR FOR DISTRIBUTION TO U.S. WIRE SERVICES

The upper intercepts in both holes WHTGS17RC-001 & 002 were in the GS Main Zone and validate RC as an effective drilling method on the Golden Saddle. Additionally, the intercepts infill and demonstrate the continuity of near surface, high grade (>5 g/t Au) mineralization along the southern margin of the deposit area. The deeper intercepts indicate strong continuity of at least three sub-parallel zones below the GS Main Zone. The majority of previous drilling on the Golden Saddle focused on the GS Main Zone and did not adequately test mineralization in the “footwall.” The current interpretation is that higher-grade mineralization occurs within the footwall where the zones intersect structural discontinuities such as fold hinges and lithologic contacts. To aid in the interpretation and targeting, all RC holes are being surveyed using an optical downhole televiewer. The televiewer produces an oriented, high-resolution, digital image down the hole that can be utilized for in-situ structural measurement and interpretation. Analysis of the televiewer data is in progress and will add significantly to the revised geologic interpretation of both the Golden Saddle and Arc.

True thickness is estimated to be between 65 – 95% of the reported intercepts noted above.

Shawn Ryan, Chief Technical Adviser and a Director of the Company, commented "We are pleased to see the increased grade and continuity in these first holes and are very excited by the discovery and identification of multiple new targets right on trend with the Golden Saddle deposit, identified through the collaboration of our team’s specialized multi discipline technical expertise.”

Golden Saddle East Target (“GS East”)
The newly discovered GS East target is located 600m to the NE and on strike of the Golden Saddle deposit. The target was generated through 3D modeling of IP-Resistivity sections and airborne DIGHEM data over the Golden Saddle area. At Golden Saddle, gold mineralization is associated with distinct resistivity and chargeability features that are interpreted to be related to the broader alteration halo of the system. The GS East target has a similar geophysical signature and is associated with anomalous gold in soils at surface. The target area was not tested by historic drill campaigns in on the property, and will be initially tested with drilling in 2017.

Ulli’s Target
The Ulli’s target is located on trend approximately 2.2km SW of the Golden Saddle and consists of an extensive gold in soil anomaly approximately 860m long and 220m wide with values ranging from trace up to 1,117 ppb Au. Trenching2 completed across the area by Kinross Gold Corp. (“Kinross”) in 2012 returned 0.681 g/t Au over 55m from WGUR12TR01, and its extension WGUR12TR03; including 1.38 g/t Au over 20m. These results are comparable to the trenching completed by Underworld Resources Inc. in 2007, on the Golden Saddle deposit which returned a 38 m wide zone of mineralization averaging 1.12g/t Au, including 4.7g/t over 5m and a minimum grade of 0.1g/t over 0.3 m3. Mineralization within the trenches are associated with fractured and brecciated quartzite, quartz veining, and fine-grained sulfide mineralization, and the target has not been previously drill tested. Drill testing in 2017 will follow up on the historic trench results and test the strike extent of the target.
2 Reported in Yukon Assessment Report #096402
3 Reported in UW’s news release UW2008 – NR#5 dated July 23, 2008 and available on SEDAR.

Ryan’s Target
The Ryan’s Target is located on trend 2.1km west of the Golden Saddle and approximately 1km northwest of the Ulli’s target. It is associated with a strong gold in soil anomaly over 500m long with values ranging from trace up to 1,576 ppb Au. Historic exploration on the target was primarily focused on a series of quartz veins at the northwestern end of the target, however, numerous structures cross-cut the area based on recent geologic mapping. The 2017 program will focus on the southeastern end of the target where Kinross had placed an isolated drill hole (WGRS11D0003) that returned 6.33 g/t over 6.56m from 159.44m depth4. Mineralization in the drill hole is associated with strongly brecciated quartzite cut by late quartz veins and pyrite stringers, and appears to be associated with a resistivity low feature based on IP-Resistivity surveys performed by the Company in 2017. The resistivity is projected to come to surface approximately 130m south of the historic drill hole where it is it associated with a distinct E-W linear feature in Lidar imagery and gold in soils up to 1,576 ppb Au. Drill testing in 2017 will follow up on the historic drill intercept and test the interpreted surface trace of mineralization to the south.
4 Reported in Yukon Assessment Report #096402

The Company encourages individuals interested in the Company to visit its website (www.whitegoldcorp.ca) to further understand the size and scope of the Company’s projects in the White Gold District. 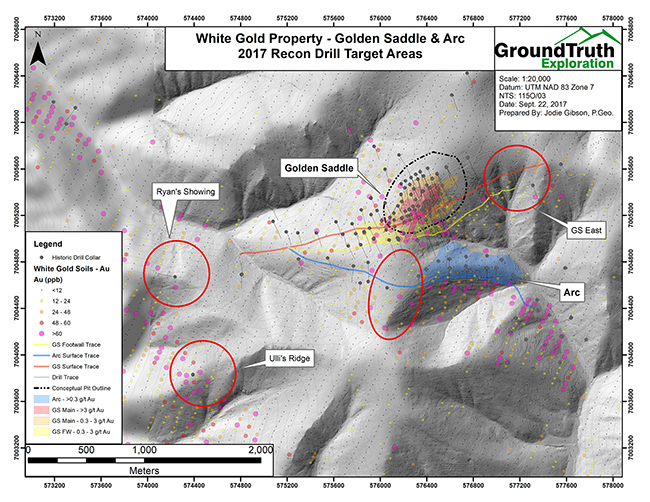 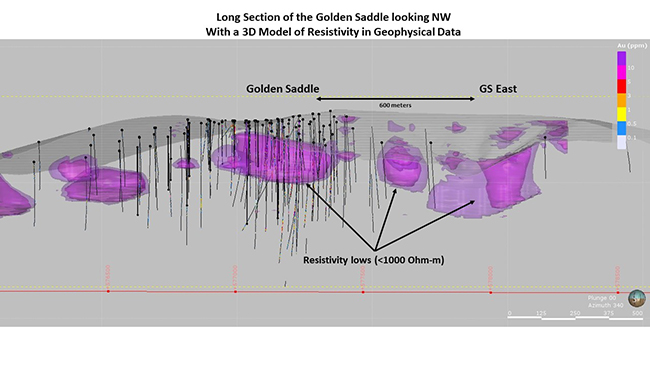 Jodie Gibson, PGeo, of GroundTruth Exploration Inc. is a “qualified person” as defined under National Instrument 43-101 – Standards of Disclosure for Mineral Projects (“NI 43-101”), and has reviewed and approved the content of this news release. GroundTruth Exploration Inc. is owned by the spouse of a director of the Company. Potential quantity and grade is conceptual in nature. There has been insufficient exploration to define a mineral resource on any of the Company’s properties to date, and it is uncertain if further exploration will result in any such target being delineated as a mineral resource.

Ground Truth Exploration Inc., Dawson City, YT, designed and managed all work for the Company. The reported work was completed using industry standard procedures, including a quality assurance/quality control (QA/QC) program consisting of the insertion of certified standards, blanks, and field duplicates into the sample stream. The qualified person detected no significant QA/QC issues during review of the data.

The Company owns a portfolio of 19,438 quartz claims across 30 properties covering over 390,000 hectares representing approximately 40% of the Yukon’s White Gold District. Preliminary exploration work has produced several prospective targets. The claim packages are bordered by sizable gold discoveries owned by Goldcorp Inc. and Western Copper and Gold Corporation. The Company has outlined an aggressive exploration plan to further explore its properties. For more information visit www.whitegoldcorp.ca.

These forward-looking statements are based on reasonable assumptions and estimates of management of the Company at the time such statements were made. Actual future results may differ materially as forward-looking statements involve known and unknown risks, uncertainties and other factors which may cause the actual results, performance or achievements of the Company to materially differ from any future results, performance or achievements expressed or implied by such forward-looking statements. Such factors, among other things, include: the expected benefits to the Company relating to the exploration conducted and proposed to be conducted at the White Gold properties; failure to identify mineral resources; the preliminary nature of metallurgical test results; uncertainties relating to the availability and costs of financing needed in the future, including to fund any exploration programs on the White Gold properties and the Company’s other properties; business integration risks; fluctuations in general macroeconomic conditions; fluctuations in securities markets; fluctuations in spot and forward prices of gold, silver, base metals or certain other commodities; fluctuations in currency markets (such as the Canadian dollar to United States dollar exchange rate); change in national and local government, legislation, taxation, controls, regulations and political or economic developments; risks and hazards associated with the business of mineral exploration, development and mining (including environmental hazards, industrial accidents, unusual or unexpected formations pressures, cave-ins and flooding); inability to obtain adequate insurance to cover risks and hazards; the presence of laws and regulations that may impose restrictions on mining; employee relations; relationships with and claims by local communities and indigenous populations; availability of increasing costs associated with mining inputs and labour; the speculative nature of mineral exploration and development (including the risks of obtaining necessary licenses, permits and approvals from government authorities); the unlikelihood that properties that are explored are ultimately developed into producing mines; geological factors; actual results of current and future exploration; changes in project parameters as plans continue to be evaluated; soil sampling results being preliminary in nature and are not conclusive evidence of the likelihood of a mineral deposit; title to properties; and those factors described under the heading "Risks and Uncertainties" in the Company’s most recently filed management’s discussion and analysis. Although the forward-looking statements contained in this news release are based upon what management of the Company believes, or believed at the time, to be reasonable assumptions, the Company cannot assure shareholders that actual results will be consistent with such forward-looking statements, as there may be other factors that cause results not to be as anticipated, estimated or intended. Accordingly, readers should not place undue reliance on forward-looking statements and information. There can be no assurance that forward-looking information, or the material factors or assumptions used to develop such forward-looking information, will prove to be accurate. The Company does not undertake any obligations to release publicly any revisions for updating any voluntary forward-looking statements, except as required by applicable securities law.